States & major metros with largest used-car sales growth in May 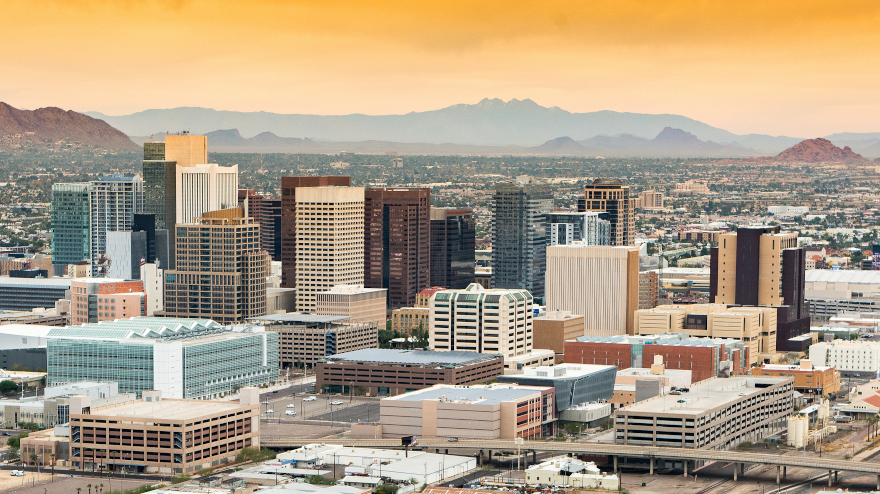 Used-vehicle sales jumped 105.5% month-over-month in May and the year-over-year deficit narrowed from 38.4% in April to 12.5% last month, according to a report from iSeeCars.com.

And while the majority of states and major cities were still down year-over-year in May, half of the nation’s 20 largest markets more than doubled their used-car sales from April, with all 50 states climbing month-over-month.

The comprehensive report from iSeeCars examined 3.6 million used-car transactions over those two months, and found that the used-car gains and losses in May tended to vary among vehicle segments, makes/models and price points, according to iSeeCars.

That variance also includes geographic areas, which is where this story will focus.

Starting with the top 20 metropolitan areas in the U.S., just one showed year-over-year used-car sales growth in May: Phoenix, where used-car sales climbed 5.9% from May 2019, the analysis shows.

Minneapolis-St. Paul had flat used-car sales from a year ago and the remaining 18 largest metros were down.

However, all of the top 20 metro areas showed used sales growth from April, including 10 with triple-digit-percentage growth. The rest showed double-digit gains.

For example, Seattle-Tacoma had the largest month-over-month growth among the top 20 metros at 216.6%, according to the iSeeCars data. Next, used sales in the Philadelphia area were up 205.5% from April.

Expanding the iSeeCars data set to include the 50 largest metro areas, there were nine markets that showed year-over-year growth. No. 1 on that list was St. Louis, where pre-owned sales for the month climbed 9.5% from last May, according to iSeeCars.

“Car sales were permitted in Missouri during the pandemic, but St. Louis remained under lockdown even after the state lifted its orders in the beginning of the month due to the number of cases,” said Ly. “This suggests that consumers may have held off on buying cars until the order was lifted in mid-May.”

All of the 50 largest metro areas showed month-over-month growth. The most substantial hike was in the Harrisburg/Lancaster/York area of Pennsylania, where used sales were up 343% from April (but down 23.9% year-over-year).

“Most dealers are probably breathing a sigh of relief to see these increases, but automotive isn’t entirely out of the woods yet,” Cross-Sell said in this analysis. “The U.S. as a whole is down 33.9% compared to a year ago. With lingering concern about the pandemic and many states reopening – many buyers will still be hesitant to return to market.”

On a year-over-year basis, eight states showed growth in May, led by Hawaii’s 40.0% increase.

“The state with the greatest increase is Hawaii, which saw significant growth in May 2020 over the previous year,” said Ly. “The state had the largest year-over-year difference in average price, with cars bought in May 2020 on average 13.5% cheaper than cars bought in 2019, which suggests that more consumers are buying used cars amid the downturn and taking advantage of low prices.”

Of Vermont, Ly said: “Although May sales doubled over the previous month, the state’s historic unemployment rate likely kept consumers from buying cars.”

After Michigan, the state with the next-highest decline was Pennsylvania, where used sales were off 25.2%. However, it had the strongest month-over-month growth at 227.5%.

Similarly, Washington (which was middle of the pack in terms of year-over-year change) was down 6.0% from May 2019, but its sales jumped 199.5% from April.

Put differently, used-car sales in these two states essentially tripled from April to May.

“Pennsylvania had strict orders to ban car sales until online sales were allowed in late April,” said Ly. “Washington was among the first areas to have a stay-at-home order, and auto dealers were under strict restrictions before opening in early May.”

All 50 states showed at least double-digit-percentage growth in used-car sales from April to May, the iSeeCars data shows.

In addition to Washington and Pennsylvania, 13 other states showed show triple-digit-percentage growth in used sales from April.

Below are charts from iSeeCars breaking down year-over-year and month-over-month changes in used-car sales among the top 20 metro areas, the top 50 metro areas and the 50 stats. All charts and data courtesy of iSeeCars.