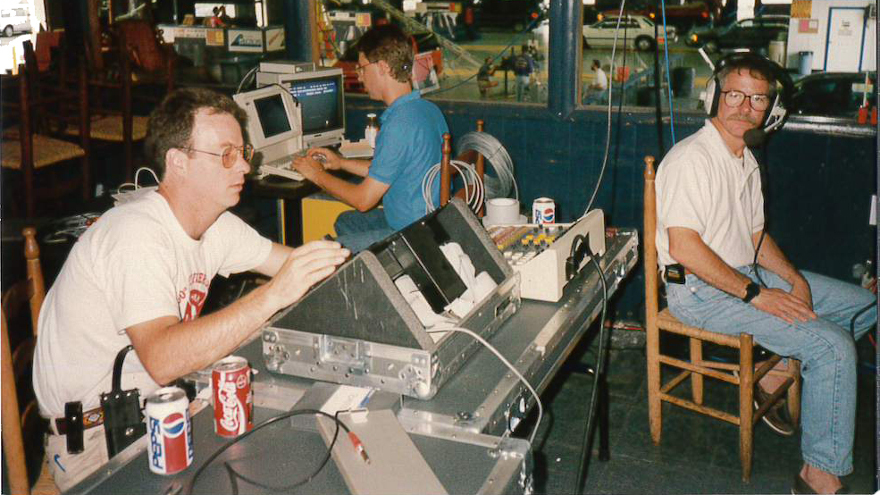 Particularly in the COVID-19 era, the importance and growing presence of simulcast auction sales cannot be overstated. From corporate giants to independents, the ability to simulcast is a necessity in the tool belt of an auto auction.

Digital-leaning wholesale may now be ubiquitous, but it has been years — decades, even — in the making.

In fact, Monday marks the 25th anniversary of what ServNet has said was the first-ever auto auction sale to be simulcasted.

“400 vehicles were offered that day, and 400 were sold. 125 bidders were in attendance on the floor, and 15 bidders chose to stay at their respective dealerships and bid remotely,” State Line owner Jeff Barber said in a news release. “Forty-five cars were purchased electronically by these remote bidders. At the time, all of us at State Line felt that we were involved in something ground breaking, one that would shape the future of the auto auction industry. Looking back now, we all realize we were right!”

In light of the 25th anniversary of this sale, below you will find an Auto Remarketing feature from August 2015 about that sale.

It is late summer 1995 in New York City — one year before its Yankees reignited their baseball dynasty and won their first of four World Series in five years, one year after its Rangers reached hockey’s mountaintop and its Knicks got oh-so-close in basketball.

And meeting in the singles finals of the U.S Open tennis tournament in the city that summer are, arguably, some of the generation’s greatest stars: Pete Sampras beating Andre Agassi in the men’s final, Steffi Graf defeating Monica Seles in the women’s.

What, you might ask, does that have to do with remarketing?

Not a whole lot, other than this:

Some of the satellite trucks at that 1995 tennis tournament in Queens would end up, weeks later and some 200-plus miles to the northwest, playing a pivotal role in what is described by at least one account as being the first car ever sold via simulcast.

ServNet has shared an account of the events that happened Oct. 12, 1995 at State Line Auto Auction in Waverly, N.Y.

Campus had technologies that he felt auctions could use; for instance, there was a device that let conference attendees vote electronically, and then those votes could be tabulated.

A large pharmaceutical company was a client of the Campus Group and wanted physicians to be able to use the technology in real time. In essence, doctors at separate conferences could all vote their opinions at the same time. The Campus Group utilized satellite technology to accomplish this.

Campus thought this might be useful for the auction business, as well, so he presented this to the ServNet group.

Jeff Barber, the owner of State Line Auto Auction, decided to give it a shot, as long as there was interest in the product.

With State Line having been a GM Sponsored Auction since 1989, Barber and Beyer approached then-GM Remarketing director Ford Sims, who gave them the greenlight to use this satellite technology at one of their sales.

Some serendipity in all of this: there were already satellite dishes available at GM dealerships, who would be the folks actually bidding at the sale. These stores used them for their parts departments, the story goes.

With this in play, the auction’s sales and marketing team sought out permission to use this existing equipment for remote bidding.

This foundation of the idea bubbled into a project: GM could hold a closed auction, and allow dealers who weren’t present in the actual lanes in Waverly to bid on cars remotely at the same time the sale was happening.

The report explains the technology involved in the project worked like this: Live video was streamed via satellite and audio was streamed through a phone bridge in Kansas. No Internet was involved.

And the satellite trucks transmitting that video signal? Those were the ones that had come from the aforementioned U.S. Open.

State Line included 400 vehicles at its sale that day, all of which sold. There were 125 bidders who were in the lanes at Waverly, with 15 bidders who chose to test out this new remote bidding from their respective dealerships.

Thirteen of those 15 ended up buying at least one car remotely, and they combined to purchase 45. The first was sold to Farnsworth Chevrolet of Canandaigua, N.Y., which ended up purchasing eight remotely that day.  Bob Johnson Chevrolet purchased 12.

So how has the industry been impacted some 20 years later?

Consider this: in 2014, 17.9 percent of auction sales were Internet-based, according to the 2014 NAAA Annual Review.

And for the record, Sampras and Graf happened to win a few more Grand Slam titles in the years since.

The Knicks, well, their time is coming.