Miskotten will continue with the company in an advisory position at West Michigan and as general manager at America’s Auto Auction Interstate 94 in Parma, Mich.

Ruzicka’s promotion was announced during the auction’s regular weekly sale on Oct. 30.

She began her auction industry career in 2006 as a receptionist for Flint Auto Auction. She moved up into the main office and eventually ran the Chrysler Marshalling Department.

In 2011, she started as a sales representative for West Michigan Auto Auction. In 2015 she became the auction’s sales manager and in 2019 was promoted to assistant general manager. 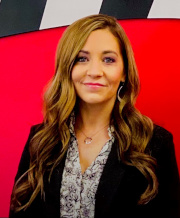 Ruzicka said she was excited to take on the general manager role.

“I love working for a company that truly cares about its customers and employees, in a business that is as exciting and challenging as the auction industry is,” Ruzicka said in a news release.

She continued, “I have had the opportunity to work with so many talented and supportive people since I arrived at America’s West Michigan, who have taught me so much and contributed to my growth both personally and professionally. Starting with my parents, who instilled in me a work ethic that has served me well, I have been privileged to work with Tammy Swofford and Brian Thomas at the home office who have provided such consistent support and encouragement, and most especially with Carl Miskotten who has mentored and believed in me over the years, and provided an outstanding example of the kind of person that both customers and employees trust and depend on.”

Thomas continued, “America’s strongest asset is its people, and we are always happy to be able to promote from within, particularly when we have someone like Sarah with exceptional character and skill to take on important leadership positions. Carl Miskotten has done an incredible job at building a team at West Michigan, which strives to deliver the best customer service experience. As Sarah takes over leadership of that team, we’re excited to see her take the auction to the next level.”