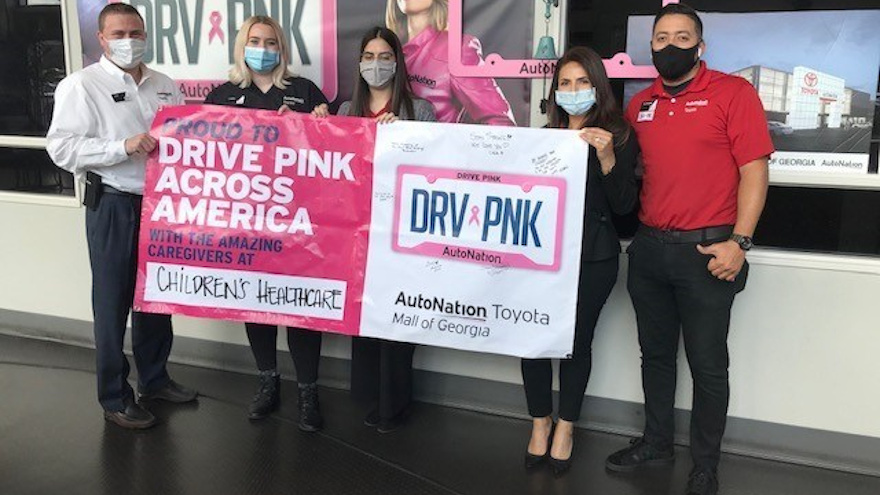 “Sadly, just about everyone has been touched by cancer,” Logan said in a news release. “I am so proud to work for a company that not only supported me throughout my journey, but that also supports such an important cause.”

For AutoNation, that cause has reached a new milestone. The auto retailer said funds raised for cancer research and treatment through Drive Pink have surpassed $25 million.

The announcement took place as the company prepares to commemorate Breast Cancer Awareness Month in October.

In 2015, AutoNation launched Drive Pink, which seeks to defeat cancer, create awareness, and support research. Since that time, the company says it has directed its philanthropic efforts toward driving out cancer.

This year, DRV PNK funds are being directed toward seven research projects through the Breast Cancer Research Foundation.

That foundation’s president and chief executive officer Myra Biblowit said AutoNation has played a strong role in allowing the foundation “to be at the vanguard of every major breakthrough in breast cancer prevention, diagnosis, treatment and survivorship.”

“This year, we’ve taken our mission to new levels, thanks to the incredible support of our customers, our associates and our partners,” Jackson said.

“They may be competitors on the track, but off the track they are united in their commitment to help drive out cancer,” AutoNation wrote.

Preparing for the company’s annual DRV PNK Across America Day, AutoNation Associates nationwide are selecting local cancer treatment facilities to receive care bags for cancer patients. For this year’s virtual celebration, the company will ship bags and frontline caregiver appreciation treats directly to the treatment centers on behalf of the stores.

“Each year our associates look forward to delivering thousands of comfort bags to patients battling the disease,” Jackson said. “This year’s deliveries may not be in person, but the compassion, dedication and enthusiasm have not waned at all.”