Two well-known names within the used-vehicle space — Mike Stanton and Tim West — each recently were given industry accolades for their service.

For West, Black Book’s longtime vice president of North American auctions, his accolade arrived during virtual award ceremonies; first on Wednesday with the International Automotive Remarketers Alliance (IARA) and then a day later with NAAA.

The organizations honored West to highlighted his more than 30-year contributions to the remarketing industry. The award was originally scheduled to be presented at the 2020 CAR Conference.

Remarking on his acceptance, West thanked his Black Book family, who provided him the opportunity to enter the industry 36 years ago. 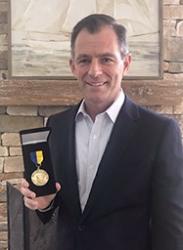 “I have been so fortunate to work for Black Book for 36 years and utilize the support and resources that they have provided for myself and all of our employees. As a matter of fact, I don’t consider this an individual award at all but one I share with each and every one of our employees,” West said through a news release distributed by Black Book.

West recognized the wonderful industry colleagues he has worked alongside, including auction owners, general managers, and industry executives, whom he has built significant personal and professional relationships with, and his own family, who allowed him to travel freely, often at times, to establish the relationships that have helped to allow Black Book the ability to be recognized as one of the leading brands in our industry.

“I would also be remiss if I didn’t mention the unbelievable leadership that I have benefited and learned from. Gene McDonald, Bob Burnett and of course Tom Cross are not only champions for our industry but also for doing the right thing in any situation,” West said.

West, who joined Black Book 36 years ago as an editorial assistant, eventually took on the responsibility for editing the passenger car portion of Black Book’s domestic guides. After several years in that position, West was named assistant field coordinator and worked directly with the survey contractors who attend wholesale auto auctions throughout North America on behalf of Black Book.

West was named vice president at Black Book in 2003. In 2004, he was inducted into the National Independent Automobile Dealers Association Ring of Honor.

NAAA also inducted West into its Hall of Fame in 2011. In 2012 West was designated as a Warren Young Fellow by NAAA in recognition of his many contributions to the industry and association.

And speaking of the Warren Young Fellow program, the newest one is Staton, the executive vice president and chief operating officer of the National Automobile Dealers Association.

NAAA, which represents about 350 wholesale auto auctions and more than 140 associate members, gave the award with a $2,500 donation in Stanton’s name to NAAA’s nonprofit Warren Young Scholastic Foundation. A fellow is a donor at that level, or in whose honor or memory a contribution is made in that amount, to support the scholarship organization.

Since its establishment in 2004, the Scholastic Foundation, named in honor of Warren Young, Sr., a pioneer of the auto auction industry who retired after 35 years of service to his profession and NAAA, has helped 180 students pursue dreams of higher education and raised more than $2.5 million. It awards $52,000 in merit scholarships annually for study at accredited institutions.

Stanton joins an exclusive group of 124 others who have attained the lifetime distinction of being named a Fellow. He received a gold medallion, a framed commemorative certificate and will have his name engraved on a plaque of esteemed Fellows at NAAA headquarters.

“Mike has been a trusted friend and consistent supporter of our association and members for more than a decade,” Taylor said in a news release distributed by NAAA. “He’s attended every NAAA convention since 2006, sponsored the lovely luggage given to our incoming presidents, presented the Hall of Fame ring to the inductees, and was instrumental in helping secure automotive industry analyst Glenn Mercer to prepare NAAA’s Auction of Tomorrow 2027 report.”

She noted that under Stanton’s 11-year leadership of the AuctionNet relationship for NADA/JD Power, NAAA’s share of AuctionNet revenue grew an astounding 231 percent, and the project has generated more than $20 million for the association in this period.

“Also, Mike has helped facilitate the ‘Through the Eyes of the Dealer’ training for the NADA Dealer Academy and assisted with the auto technician recruitment strategy through the NADA Foundation,” Taylor said.

In addition, Stanton has been actively involved in the joint advocacy efforts of NADA and NAAA in Washington, D.C. He continues to offer strong support on federal issues that can impact the members of both organizations and the industry.

Hackett added, “When you need something done on Capitol Hill, it’s nice to know you have Mike Stanton in your corner to get things done.”

Other industry executives to be named a Warren Young Fellow in recent weeks include Mike Browning, who is general manager of Manheim San Antonio and a past NAAA president, as well as Tim Massingale, KAR remarketing services vice president of environmental safety and health, and Mike Roy, vice president of auto auction practice for Arthur J. Gallagher Risk Management Services.