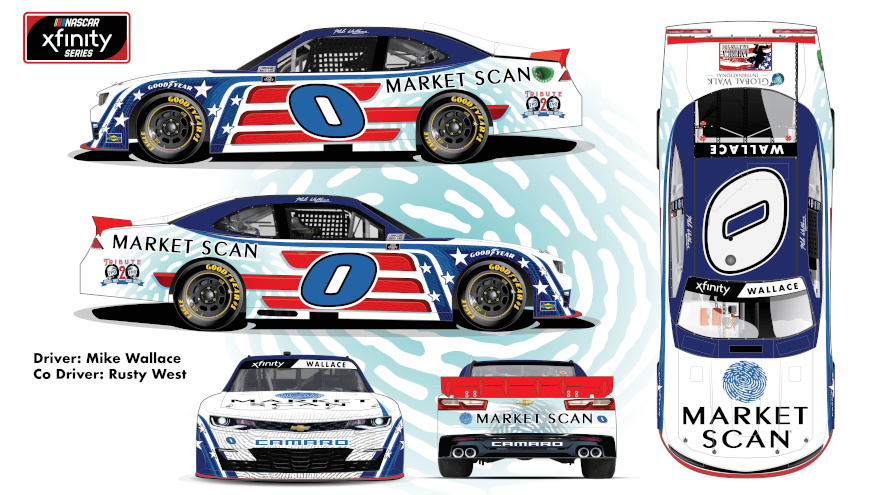 Market Scan is feeling quite patriotic with the Fourth of July arriving in just a few days.

The partnership between JD Motorsports with Gary Keller and Market Scan for Mike Wallace’s No. 0 Chevrolet at Indianapolis Motor Speedway (IMS) on July 4 has an American patriotic purpose.

The automotive solutions and data provider based in Camarillo, Calif., announced the partnership in May for the inaugural NASCAR Xfinity Series race at IMS. The paint scheme recently revealed has an American patriotic theme in red, white and blue, prominently displaying the logos of two amazing charities.

The primary purpose is to feature U.S. Marine Corps Veteran Danny Garcia’s “Honor Walk 2020,” a four-month long initiative to raise funds for “America Salutes You.” This “America Salutes You” collaboration kicks off on July 4 race weekend in Indianapolis where Garcia will begin his multi-state journey.

“To partner with JD Motorsports, Mike Wallace and Market Scan is going to be incredible for our causes,” Garcia said in a news release. “The money raised through donations will benefit veterans, first responders and their families.

Kicking off this year’s “Honor Walk” with this paint scheme on July 4 and during a NASCAR weekend is “about as patriotic as you can get,” according to Garcia, who added, “The people who benefit from this need our help right now more than ever.”

For Wallace, it represents his first racing competition during a NASCAR event since 2015.

“Making a return to racing partnering with Market Scan, supporting Danny Garcia and the two charities is incredible,” Wallace said. “I love this country and all the good in our lives as Americans.

“When Rusty West (co-founder and president of Market Scan) talked to me about supporting Danny’s walk and the associated causes, I was on board immediately,” Wallace continued. “As racers, we are hyper-focused on the racing aspect. For Indy, we can take our incredible paint scheme and put attention to what Danny is doing and how our fans can help fellow Americans.”

Market Scan said its involvement is driven by the company’s desire to support fellow Americans.

“I am incredibly proud of how this initiative will make a difference in the lives of many veterans, first responders and their families,” West said. “The race car looks fantastic and the plan is to share the patriotic look and spirit with a lot of folks during Danny’s walk. The new RV, which Danny will call home for four months, features the same design as Mike’s racecar. It will help shine a spotlight on Danny’s walk and the charities, wherever he goes.

“A special thank you goes to Child Safety Network, now celebrating its 30th year of national public service,” West continued. “Ward Leber, CSN’s founder, hooked us up with the wrap for our new RV. When we ran the idea by Ward, he jumped all over it.

Garcia is a U.S. Marine Corps and Vietnam war veteran, former law enforcement officer and ordained minister.  He has been walking for charity since 1996, taking 52 million steps on six continents.

Between July 4 and Oct. 29, Garcia will travel in increments of 25 to 50 miles a day in phases. Stops will include city halls, Veterans Affairs locations, first responder locations, fire stations, police stations, hospitals, and partner retail locations. The walk ends on Oct. 29 at the Grand Ole Opry during the “America Salutes You” benefit concert.

The mission of “America Salutes You” is to raise awareness and funds for extraordinary wellness charities, assisting military and veterans. Those initiatives include promoting the U.S. Department of Veterans Affairs’ efforts to provide access, support and services that ensure veterans’ health and quality of life.

Anyone interested in making a donation to support Danny’s fundraising efforts for “America Salutes You” can text FREEDOM to 20222 or make a pledge on www.americasalutesyou.org.