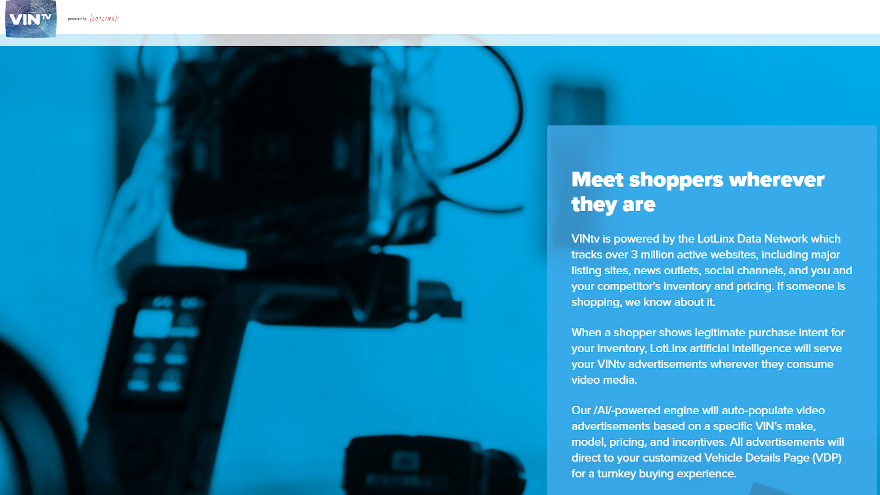 The platform is called, VINtv, and among the product features is automatic generation of video advertisements for each VIN in a campaign. Another feature is LotLinx AI targeting capabilities that reach “inventory ready” buyers.

The company says VINtv can target a large audience of mobile consumers, and with the platform, dealers can expand their inventory exposure by delivering shopping sessions to the inventory or VINs dealers need to move most.

LotLinx’s VINtv taps into the mobile video market, and that helps dealers gain the ability to reach more consumers across platforms such as YouTube, Facebook, Google and OTT streaming services. That, according to the company, can “put the right car in front of the right consumers.”

Len Short is chairman and chief executive officer of LotLinx, which describes itself as an “inventory management tech leader” that continues developing tools that dealers can use across the automobile industry.

“Now more than ever, dealers need tools that can help them place their inventory in front of consumers who are in the purchasing phase of their search process,” Short said in a news release. “By maximizing their position in the video ad market space, dealers will be able to see an increased engagement rate with higher sales results.”

LotLinx said that with VINtv, dealers gain a tool to implement into their strategic marketing strategy for connecting with consumers.

The company noted that 70 million Americans engage in online auto shopping behavior per month, and a third of auto research takes place with smartphones and mobile devices.

Because of that, LotLinx said, dealers need VINtv’s platform capabilities to position their inventory in front of those “in the most pivotal points of the buying and research process.”

The company said VINtv takes advantage of the value video holds in influencing consumers. With VINtv, dealers gain increased engagement and click-through rates, and LotLinx said VINtv can be a “top of the line solution for their most pressing advertising needs.”