How full-year used-vehicle sales could pan out 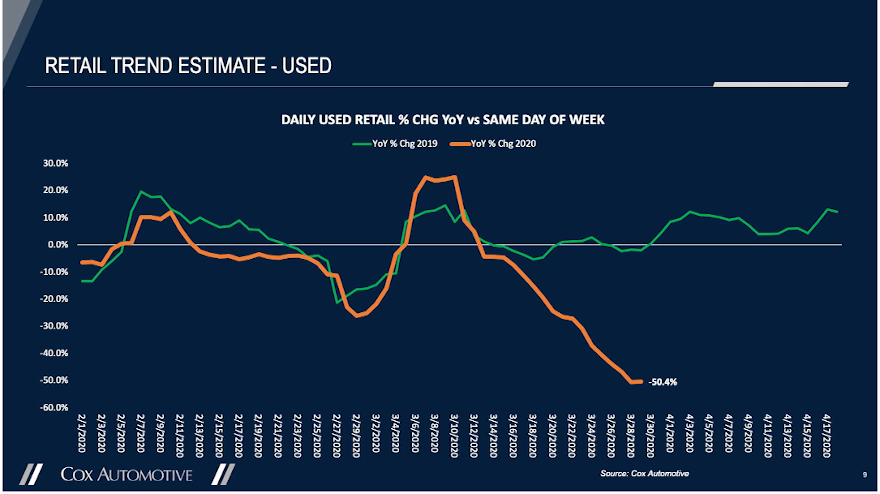 Used-vehicle sales declined 50% year-over-year in the last full week of March, according to the latest video report from Cox Automotive chief economist Jonathan Smoke that was released Tuesday.

“However, when we look at the leading indicators of what these sales are likely to be, the underlying unique credit application submissions, they suggest that sales will continue to fall this week, especially as stay-at-home orders continue to grow all across the country,” Smoke said in the video, referring to this most recently completed week.

On March 27, TrueCar’s ALG business unit was forecasting just over 2.7 million used-vehicle sales for March, a 29% year-over-year slide and a 24% month-over-month dip.

Full-year used-car sales are likely to be less than 38 million, best case scenario, Smoke said in the video. They potentially could end up below 36 million, he said.

One positive note, however, for the auto retail market, in general: online shopping began to improve midway through the last week of March and continues to improve, Smoke said.

Vehicle detail page views on Autotrader were up 7% the last weekend in March against the prior weekend and visits were up 11% on the Kelley Blue Book.

“Dealer.com, which manages thousands of dealer websites, saw deceleration over the weekend in traffic declines that were much worse two weeks ago,” he said.