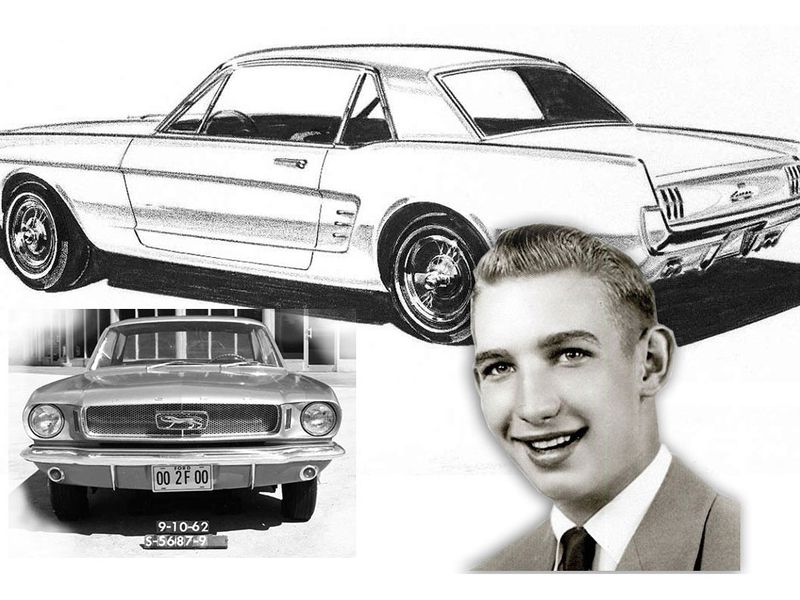 Gale Halderman, credited with the exterior styling of the original Ford Mustang, based on a sketch he created some 21 months before the car’s April 1964 public debut, died Wednesday. He was 87.

The cause of death, at a hospital in Troy, Ohio, was cancer, the Dayton Daily News reported, citing the family.

Halderman was a fairly young designer whose early sketch of the Mustang emerged the winner among a competition during a secret project to create what became the first so-called pony car.

Along with Hal Sperlich, he was the last survivor among the small group of key players — some called it a dream team — that created one of the auto industry’s most successful cars.

The Mustang, with a long hood and sleek body, proved an overnight sensation when it went on sale in April 1964. It remains one of the last remaining cars in Ford Motor Co.’s current lineup and one of the auto industry’s few nameplates to be continuously produced for more than 55 years.

FROM OUR ARCHIVES: Ford honors the past, launches new pony for a shifting market

Halderman attended the Dayton Art Institute in Dayton, Ohio, where he studied art with comedian Jonathan Winters. Yet he struggled with whether to become a commercial artist or a car designer. At the Dayton Art Institute, he studied under Read Viemeister, who played a role in designing the Tucker automobile, and helped convince him to pursue a career in the auto industry.

Upon graduation in 1954, he was hired by Gene Bordinat, another designer born in Ohio, as a designer in Ford’s Lincoln-Mercury studio. He soon transferred to the Ford Design Studio.

He was soon promoted to design manager of the Ford Design Studio, under Joe Oros, who became director.

In July 1962, Oros handed Halderman a new assignment: Come up with an entry for a competition among studios, spurred by Lee Iacocca, to create a sporty personal car that arose out of secret Fairlane Committee meetings.

Iacocca and others were eager to create an affordable sports car to challenge the Chevrolet Corvair Monza. With Henry Ford II opposed to new product programs so soon after the Edsel flopped, Iacocca had to work clandestinely on the Mustang.

“We were so busy doing Ford cars that the only design time that I had to work on it was at home,” Halderman said in a 1985 interview with The Henry Ford museum. “So I went home, and I sketched on this project. And, actually, the car was clay modeled from a sketch I did on my porch.”

In September 1962, the Ford, Lincoln and Mercury studios submitted sketches and clay models as part of a competition for the final evaluation of what would become a sporty, four-seat car sold under the Blue Oval.

More than a dozen very different designs were proposed but Halderman’s proposal — which he called the Cougar — was selected.

The grille featured a stylized big-cat contained by a surround that would eventually be known as the pony corral. Halderman and Oros pushed hard for the Cougar name.

But Frank Thomas, a J. Walter Thompson account executive who worked on the name research, once said Mustang rose to the top “because it had the excitement of wide open spaces and was American as all hell.”

Halderman said 77 of the company’s engineering rules were broken at the time to manufacture the original Mustang.

Galloping logo
He also played a role in the design of the Mustang’s galloping horse logo. He eventually took on all Mustang design work, including the 2+2 Fastback, and oversaw every styling change through the 1971-1973 car. He was later promoted to the head of the Ford design studio after Oros’s promotion to chief designer at Ford of Europe.

Halderman replaced John Najjar in the truck studio in 1968 and then succeeded Buzz Grisinger as the head of the Lincoln-Mercury studio, where he oversaw the design of the Lincoln Continentals Mark VI, VII, and VIII, and the 1990 Town Car.

He retired from Ford in 1994 and spent his later years in the same Tip City, Ohio, farmhouse where he was born in 1932. He converted the farm’s big barn into the Halderman Design Museum, which houses scores of design sketches and a few cars he collected, including a1966 Mustang convertible, a 1927 Model T, a 1931 Model A Cabriolet and a 2002 Thunderbird.

Part of the museum’s space is devoted to the vintage camera collection of his daughter, Karen Koenig.

Like many Ford managers and designers of his era, he received offers to jump to rivals, notably Chrysler, but never showed an interest in leaving the automotive design studio.

“The further I studied, and the more I learned,” Halderman told The Henry Ford Museum in the 1985 interview, “I made up my mind that cars were really more intriguing, more a challenge and something that I can spend my lifetime doing and be satisfied with it.”