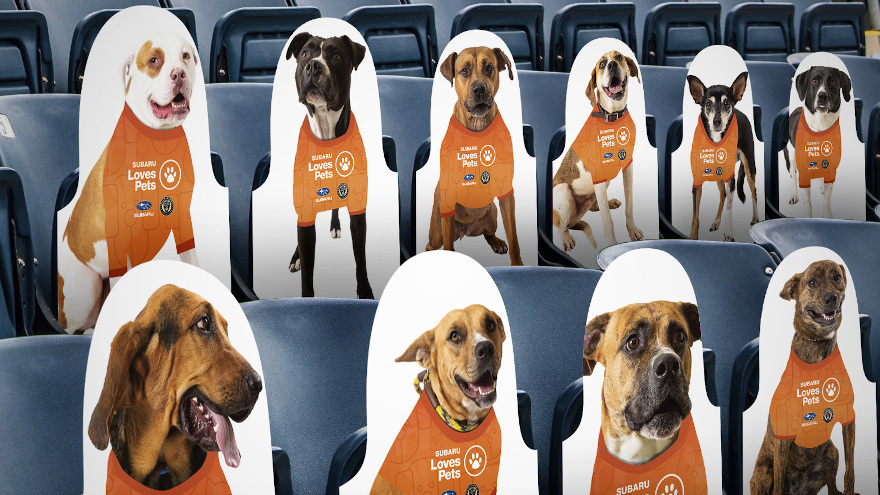 Causes with strong connections to AutoNation and Subaru of America — overcoming cancer and adopting dogs — are getting extra promotional attention from the dealer group and automaker, respectively.

This week, AutoNation launched what the retailer is calling a “profoundly emotional” Drive Pink omni-channel media campaign to celebrate the victories that so many have had in their fight against cancer.

Meanwhile, Subaru and the Philadelphia Union announced that Subaru Park, home of the Union that competes in Major League Soccer (MLS), will provide stadium seating to the likenesses of local adoptable dogs at home games in the 2020 season.

AutoNation is looking to begin this latest Drive Pink endeavor in a big way as the first ad in the campaign is set to debut during Sunday’s national telecast of the 104th Indianapolis 500 on NBC.

The company highlighted the campaign’s 30-second and 60-second spots showcase cancer patients’ triumphs through their own video clips, moving montages of patients receiving the life-affirming news that today they are cancer free, celebrating their final chemotherapy treatments and joining together with family and friends to tell the world that cancer can be beaten.

“These are our neighbors, our siblings, our parents and our children, all sharing their stories about resilience and encouraging others to never give up,” AutoNation said in a news release.

Throughout each ad, the theme of never giving up is reinforced through the use of the smash hit “Don’t Give Up On Me” by multi-platinum pop artist Andy Grammer.

“There is nothing more stirring than seeing real, everyday people announce to the world that they are cancer-free, and there’s nothing more inspirational for those struggling with cancer right now than to recognize that it’s a fight that can be won,” AutoNation executive vice president and chief customer experience officer Marc Cannon said.

“What better avenue to kickstart this new campaign than the ‘Greatest Spectacle in Racing,’ the Indy 500,” Cannon continued.

The campaign was created by Fort Lauderdale’s Zimmerman Advertising, AutoNation’s long-standing agency. It is scheduled to run across TV, digital and social media platforms beginning with the Indy 500 broadcast and continuing through the end of the year.

The company mentioned ads also will appear during MLB, NBA, NHL, NCAA and NFL sports programming along with extensive placement during prime time on major networks, including CNBC and Fox Business.

In addition, the company said Rossi will star and narrate a multi-channel social media campaign to raise awareness and funds to continue AutoNation’s fight against cancer.

In an additional sports related DRV PNK effort, AutoNation has announced a partnership with the Miami Marlins to “Strike Out Cancer!” During the 2020 season, whenever a Marlins pitcher strikes out an opposing batter, the Marlins will donate $50 to the DRV PNK initiative.

“AutoNation is committed to Drive Out Cancer as we race to over $25 million donated to cancer treatment and research,” the company said.

Switching from cancer triumphs to canine companions, images provided by Subaru of those adoptable dogs will begin to appear during the Philadelphia Union home game on Tuesday.

These cardboard cutouts of dogs available for adoptions will temporarily fill in for real-life spectators at the Union’s home opener and very first game played at Subaru Park.

Inspired by the Union’s legendary Sons of Ben team supporter group, the “Dogs of Ben” cutouts will represent a real pup available for adoption in the greater Philadelphia area. Working with local shelters, including the Providence Animal Center, Subaru said in a news release that it will fill the stands at midfield with the cardboard four-legged Union fans with the goal of uniting the real-life pups they depict with new owners.

“At Subaru, our love for pets runs as deeply as our love for soccer, and from the onset of our partnership with the Union, we knew we wanted to bring our furry friends out to Subaru Park and bring awareness to adopting shelter pets,” said Alan Bethke, senior vice president, marketing at Subaru of America.

“While home games may look a bit different this year, we hope the Dogs of Ben add some fun to gameday while helping to unite local dogs in the greater Philadelphia area with loving owners,” Bethke continued.

Subaru and the Union joined forces in February, kickstarting a multi-year stadium naming rights partnership that gave the name Subaru Park to the 18,500-seat sports and events destination and home of the Union. Together, the two companies said they are committed to supporting the greater Philadelphia community with charitable programs, including the Dogs of Ben program as an extension of the Subaru Love Promise vision.

“We are thrilled to be hosting the first Philadelphia Union game at Subaru Park on Aug. 25 and to introduce the innovative ways we are incorporating our fans, community, partners, and even adoptable pets into a Union gameday,” Philadelphia Union president Tim McDermott said. “As a community-first minded company and alongside our partner Subaru, we will continue to look for ways to help and highlight organizations in need.”

Individuals and families looking to take home a real-life furry Union fan of their own can head to https://www.philadelphiaunion.com/subaru to learn more.

Dogs of Ben is a part of the Subaru Loves Pets initiative, which is dedicated to helping improve the safety and well-being of animals in communities nationwide. The automaker’s commitment to pets is one part of its Love Promise company vision.