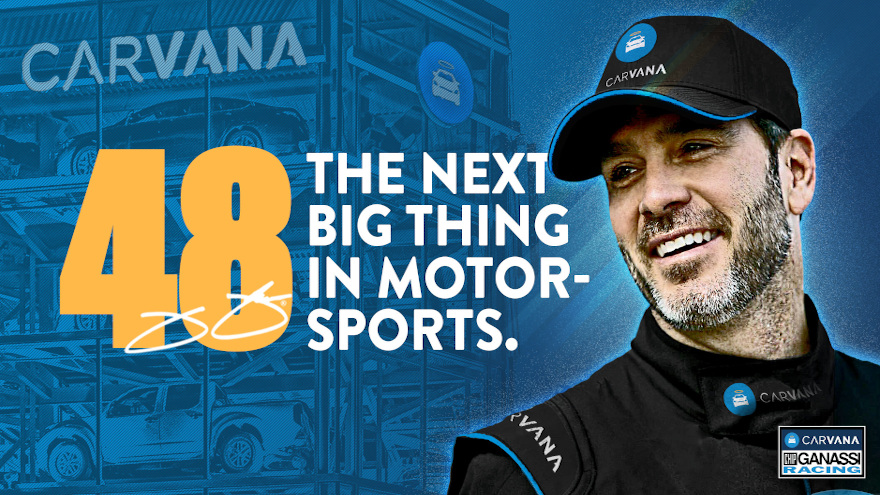 Jimmie Johnson is closing his spectacular NASCAR career with Ally Financial as his primary sponsor.

And now the seven-time stock-car series champion will begin his INDYCAR campaign with Carvana.

As a seven-time champion, Johnson co-holds the NASCAR record with Dale Earnhardt and Richard Petty for most premier series championships and is the only driver to win five consecutive titles (2006-2010).

Johnson’s 83 career wins is tied with Cale Yarborough for sixth all-time and is tops among active drivers.

With an impressive record any athlete would envy, Johnson said he saw his next challenge in INDYCAR and recently announced his plans to race with CGR in his continued pursuit of excellence.

Ahead of the upcoming season, Johnson is scheduled to participate in tests with CGR in the No. 48 Carvana Honda at Barber Motorsports Park and Laguna Seca in November.

Johnson’s new paint scheme will be unveiled prior to the start of the 2021 NTT INDYCAR SERIES season where he is scheduled to compete in the full road and street course calendar.

“Carvana is a young, tech-forward, smart and aggressive company and is the perfect partner for this next challenge in my career,” said Johnson, who will be competing for 2021 INDYCAR Rookie of the Year. “I’ve dreamed of racing in INDYCAR since I was a little kid. Going from one championship organization to another with CGR, you know the resources, including great people, are going to be there.

“To have friends like Scott (Dixon), Dario (Franchitti) and Doug (Duchardt) there to lean on and learn from just makes this transition so much better. 2021 is going to be a lot of fun,” Johnson continued in a news release.

Already with a unique marketing strategy from its nationwide footprint of vehicle vending machine to go with other media campaigns, Carvana will be able to continue to promote itself as digital retailer offering more than 20,000 vehicles with options for financing championed by Ally along with touchless delivery

“Jimmie Johnson has already made his mark as one of the best NASCAR drivers in history, yet he’s continuing to push himself with a new challenge,” Carvana chief brand officer Ryan Keeton said in the news release. “He’s not resting, but raising the bar, and that’s a mindset we can very much relate to. We’re looking forward to that shared challenger mindset, teamed up with Chip Ganassi Racing, for what is sure to be a fun, exciting racing season.”

Johnson is wrapping up his NASCAR career with race car boasting a special paint scheme orchestrated by Ally.

And then Johnson will be behind the wheel of the race car owned by Ganassi, who is eager to have Carvana on board.

“I think this is a perfect fit for our organization. Carvana is a very exciting technology company that is always continuing to challenge themselves to be the best they can be,” Ganassi said. “Like us, they value innovation. And when you add it all up, we seem to have a lot in common, which is why I think this relationship can really grow and be successful.

“You all know Jimmie and his accomplishments. Jimmie is a champion and a winner and will bring tremendous value to our organization. I think we’re going to learn as much from him and his approach as he is going to learn about INDYCAR racing. It will only move the team in a positive direction,” Ganassi went on to say.