CARFAX Canada took home honors as the “Large Business of the Year” for the second time during last week’s London Chamber of Commerce Business Achievement Awards.

The company previously won this award in 2012.

The gala for the awards, which was held Wednesday at the Best Western Lamplighter Inn in London, was scaled down this year and also live-streamed for folks unable to attend in person.

“With 20 years of history in London, we’re honoured to receive this prestigious award for a second time,” CARFAX Canada president and general manager Mark Rousseau said in a news release. “Not only has CARFAX Canada experienced success by drawing on the incredible talent London has to offer, but CARFAX in the U.S. has recently hired remote teams based in London, as well.

“This setup allows us to leverage synergies across the business in the name of achieving our joint mission; to help used-car buyers and sellers make better decisions about vehicles,” he said. “London has been a great home for CARFAX, and we’re looking forward to our continued growth.”

Shawn Vording, who is the vice president of automotive sales at CARFAX Canada, accepted the award on behalf of the company; 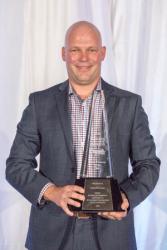 In the release, the awards are described as recognizing businesses that, “make outstanding contributions to the local community, demonstrate innovation in technology, excel in taking care of their employees and contribute significantly to London’s economical base.”