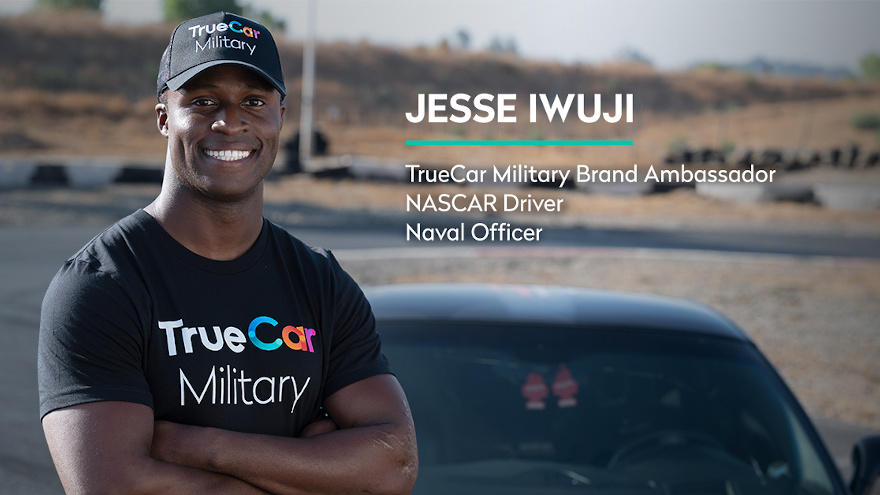 TrueCar has launched a new brand marketing campaign that it says will help build brand awareness and brand affinity for its TrueCar Military program.

Iwuji is the only NASCAR driver currently racing at the national levels who has ever served in the military, according to TrueCar.

The company says the campaign will help build awareness for its military program through research and “emotional storytelling that engages and empowers the military audience.”

TrueCar says the “Drive On” theme combines the “toughness and determination” of the military community with the TrueCar brand’s “values of optimism and empowerment.” The campaign features actual military veterans, highlighting vignettes showing different subsets and diverse lifestyles in the military community. At the same time, it will tie back to the “benefits and ease” of car shopping with TrueCar Military.

The company notes that Iwuji is one of NASCAR’s few African Americans competing in the sport, and he received NASCAR’s Diverse Driver of the Year Award in 2017 and 2018.

Iwuji will be featured in the upcoming “Drive On” marketing materials, and he will also participate in DrivenToDrive. TrueCar launched that program in 2017, noting that the program helps veterans regain their freedom to drive by providing them a new vehicle retrofit to their needs. This year will mark the fourth year of the program and fifth vehicle giveaway.

During the DrivenToDrive event ahead of Veteran’s Day, Iwuji will present a new vehicle to a veteran in need.

“As someone who has served this country the last 10 years in the military, I’m excited to work with a brand like TrueCar that understands the unique needs and lifestyle demands of the military community,” Iwuji said in a news release.

Iwuji continued, “TrueCar has exclusive benefits and incentives, while providing an easier way to navigate the complexity of car buying customized to the community. As the first ambassador for TrueCar Military, I look forward to working with them to raise awareness of this fantastic program that can save active duty service members, veterans and their families a lot of time, stress and money.”

TrueCar president and chief executive officer Mike Darrow said that “with his authenticity, passion for the military community and support for diversity,” Iwuji “embodies what TrueCar stands for as a brand.”

“We admire his strength and are proud to have him represent TrueCar Military,” Darrow said.

To launch its new brand positioning, custom persona profiles and segmentation, custom photography assets and digital, social and traditional media placements, TrueCar has partnered with military marketing specialists, Refuel Agency. TrueCar said that has improved its understanding of the military audience and led to a brand campaign that “resonates and leans deeper into the military community’s ethos.”