As hurricane season arrives, CARFAX provides a flood of information 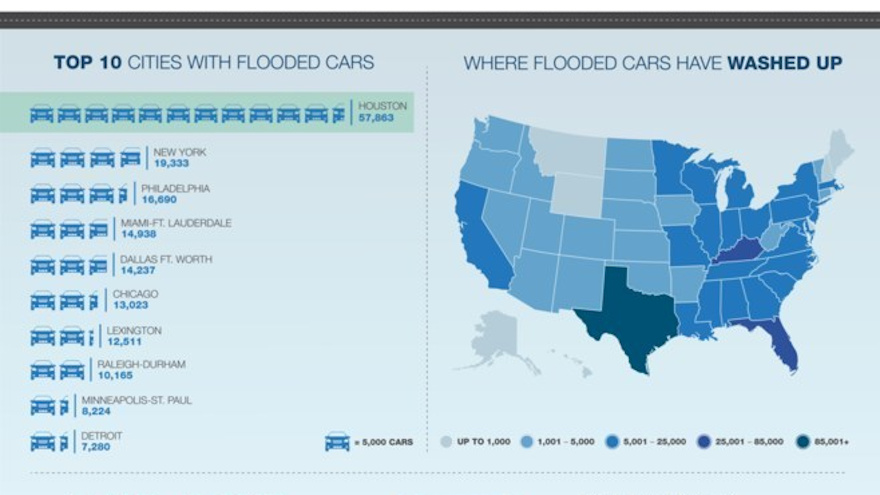 A musty odor in the interior. Damp carpets. Rust around doors.

With the arrival of hurricane season and more waterlogged vehicles showing up around the country, CARFAX is releasing information on various aspects of the situation, such as telltale signs of vehicle flooding.

CARFAX is also highlighting statistics such as the fact that 446,836 flood-damaged cars are on the roads in 2020.

That is according to annual CARFAX data, and the company says that number could rise in the wake of Hurricane Laura. CARFAX says Laura damaged as many as 5,000 vehicles.

“This nationwide surge can put unsuspecting buyers at risk,” CARFAX wrote in a news release.

The company also released a list of the top 10 states with the most vehicles reported as flood damaged by entities such as departments of motor vehicles and insurance companies. Although Texas leads the nation in flood-damaged cars, vehicles with flood damage show up in states where flooding might not be at the top of car-shoppers’ minds, according to CARFAX research.

CARFAX general manager of data Faisal Hasan said car shoppers should do their homework, and Hasan reiterated that “flood-damaged cars surface in every corner of the country.”

“Con men can quickly clean up these cars up, move them and then resell them,” Hasan said. “Once a car has been waterlogged, it will never be the same. These cars literally rot from the inside out, and the mechanical, electrical or safety systems can fail at any time.”

California motorist Carole Ross can relate. She was driving her vehicle home from the dealership and owned it for less than two hours before it broke down.

“We ran a CARFAX Report while we were on the side of the road waiting for a tow truck, and that’s when we saw the car had been in a flood in Louisiana a few years ago.”

To help consumers avoid such situations, CARFAX has released its list of the seven telltale signs of flooding. Those include:

— A musty odor in the interior, which sellers sometimes try to cover with a strong air-freshener

— Upholstery or carpeting that may be loose, new, stained or doesn’t seem to match the rest of the interior

— Rust around doors, under the dashboard, on the pedals or inside the hood and trunk latches

— Mud or silt in the glove compartment or under the seats

— Brittle wires under the dashboard

CARFAX offers a free Flood Check tool at carfax.com/flood to help protect consumers. The tool includes a national map showing where flood cars have washed up, and a flood damage checklist consumers can perform.

The following states have the most flood-damaged vehicles, and all of them have seen an increase since 2019: