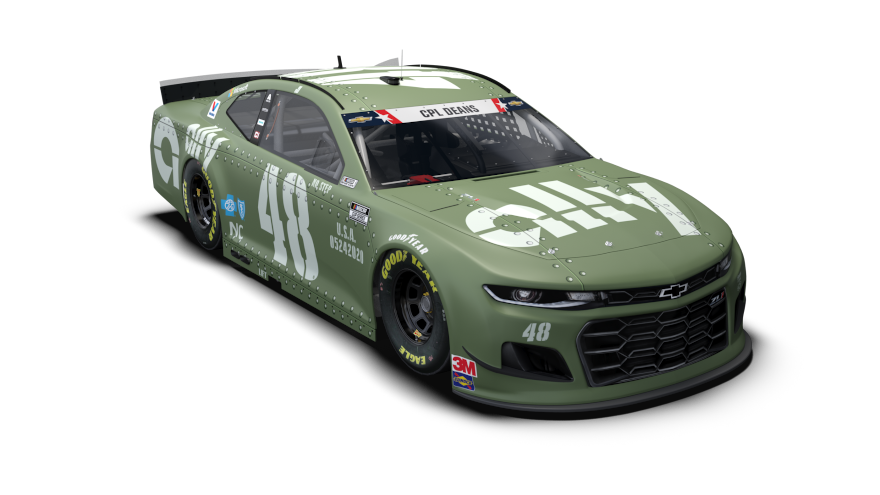 Johnson and his sponsor Ally Racing on Friday gave troops a virtual sneak peek at the military-themed paint scheme he will drive as part of a tribute to military heroes in the Memorial Day weekend race in Charlotte.

Sixteen military service members participated in a Friday videoconference, and Johnson thanked the troops for their service, answered questions and previewed the olive drab paint scheme.

Ally’s chief operating officer for auto finance David Shevsky joined Johnson at the virtual gathering. They announced a $20,000 donation to the USO of North Carolina’s Protect the Force 2020 initiative.

That project helps support military families facing difficulties because of the COVID-19 pandemic. Johnson and Ally are each donating $10,000 to the USO’s charitable fund. Troops participating in the videoconference represented the Air Force, Coast Guard, Army, Air National Guard and USO and are stationed in North Carolina.

“Memorial Day is a special time, and I’m so thankful that everyone associated with NASCAR puts out a big effort for all the men and women who have served our country,” Johnson said in a news release.

Johnson continued, “Both my grandfathers served and my brother-in-law served.”

The NASCAR Salutes initiative to recognize fallen soldiers will take place during Sunday’s 600-mile race at Charlotte Motor Speedway. The event will honor Army Corporal Patrick Deans of Winter Garden, Fla., memorializing his name on the windshield of the No. 48 Ally Chevrolet Camaro ZL1 1LE.

“To have Corporal Deans on my car and run a special paint scheme is a big honor for me to recognize the individual, and all those who have lost a loved one,” Johnson said.

The Memorial Day weekend paint scheme for the No. 48 race car swaps the traditional Ally colors of brightly contrasting plum, black and grapefruit pink with the subtle olive drab color.

“The ‘600 miles of remembrance’ Memorial weekend race is a very public tribute to the service and sacrifice made by so many Americans from all the military branches,” said Ally’s Shevsky, an Air Force veteran.

Shevsky is also a leader of the Ally Veterans employee resource group. That group helps support veterans within Ally and its communities.

“With the donation to the USO’s Protect the Force 2020 initiative, we hope to help ease the hardships faced by military families as their loved ones work to protect Americans from new, public health threats at home as well as enemies abroad,” Shevsky said.