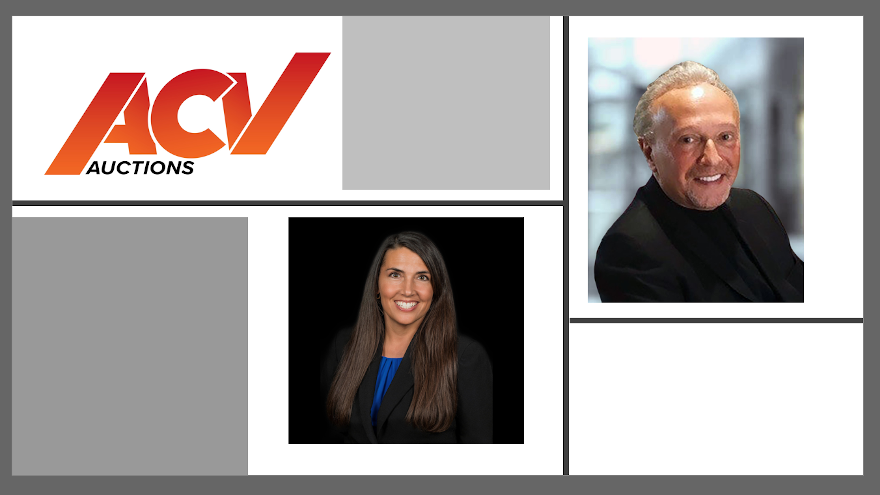 ACV Auctions welcomed two new executives with vast experience from outside the automotive industry to support enhancements within the company’s financial operations and continued advancement of its workplace and culture.

According to a news release distributed on Tuesday, the new chief financial officer at ACV is Bill Zerella and its vice president of people and culture is Sallie Reid.

Meanwhile, ACV pointed out that Reid is an accomplished human resources leader experienced in building vibrant company cultures placing human capital at the core. Reid joins ACV most recently from Delaware North where she served as vice president of human resources and brings prior relevant experience with Genuine Parts Company and Wegmans Food Markets.

“I look forward to the additional perspectives and knowledge that Bill and Sallie will bring to ACV from their diverse industry experiences. They will be impactful additions to our leadership team as we grow our share in the massive used car automotive sector,” ACV Auctions chief executive officer George Chamoun said in the news release.

“With Bill and Sallie’s respective contributions we will continue on our path to bring transparency to used cars, while being the most desired place to work,” Chamoun added.

ACV reiterated that Zerella has tremendous expertise building teams and scaling businesses. He was most recently the CFO of Luminar Technologies, a leading autonomous vehicle sensor and software company. In two years, he led the company’s growth model, raised more than $150 million in equity and scaled key functions driving significant growth in revenue.

Prior to Luminar Technologies, Zerella served as CFO of Fitbit, which was the highest growth technology company in the country in 2016, according to the news release.  Zerella was with Fitbit from 2014 to 2018, leading them through an initial public offering of $841 million, one of the largest consumer technology IPOs in history.

“I am eager to immerse myself in such an innovative, digitally-driven business relied upon by so many industry players across the country,” Zerella said. “ACV is pioneering the rapid digital transformation of the wholesale auction and inspection industry and I’m thrilled to join the team at such a critical period of growth.”

ACV mentioned that Reid has served as a strategic partner within large private and Fortune 200 companies to help achieve key business outcomes through the growth and development of their people.

ACV also highlighted that Reid focuses on employee development, leadership coaching, change management, succession planning and team building to create powerful experiences for employees, customers and clients. In addition, her experience managing large acquisitions and the related integration efforts will be an important asset to ACV as the company continues to grow both organically and through acquisition, according to the company.

Most recently, Reid served as a vice president of human resources for Delaware North, one of the largest privately held hospitality and food service companies in the world. Prior to Delaware North, she spent 10 years at Genuine Parts Co., an international organization engaged in the distribution of automotive and industrial replacement parts.

ACV also noted that Reid established career fundamentals spending more than 10 years at Wegmans Food Markets, a large regional supermarket chain that is consistently ranked a Top Place to Work in the Country.

“I am extremely excited to build upon ACV’s mission to be a best in class organization to work for. ACV’s prioritization of its people and commitment to building a world-class culture drew me to the opportunity,” Reid said.

“I look forward to playing a strategic role in furthering the company culture, advancing the development of our talent, and continuing to make ACV a compelling and innovative workplace,” she went on to say.